Zero Hedge August 11, 2013 It was only last weekthat yet another conspiracy theory became fact when we learned, for the first time after nearly three years of lies, that Tepco had been deceitful and wrong with its all clear message about Fukushima, and that instead some 300 tons of contaminated, irradiated water had been flowing into the Pacific oceanevery day. So ...... read more http://goo.gl/UczzkP
page top


Use trackback on this entry. 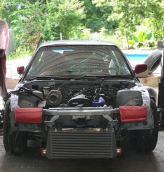